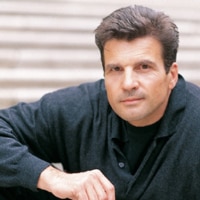 Mr. Holzmair has an extensive discography of operas, concerts and songs ranging from
Haydn, Beethoven, Schubert Brahms and Wolf to contemporary composers. His recordings
have met with critical acclaim. For years he has also been a committed advocate of works,
especially lieder, by formerly persecuted composers as is evidenced by his Krenek, Mittler,
Zeisl, Schreker and Terezin/Theresienstadt CDs. His recording of Ein deutsches Requiem
with Herbert Blomstedt won a Grammy award.