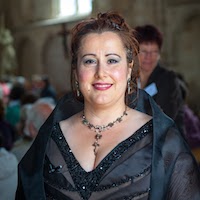 The Montreal soprano of Armenian descent, Aline Kutan has pursued an international career on the greatest stages of the world for over fifteen years. Over that time, she has sung in over 25 different productions of Mozart’s opera The Magic Flute as the Queen of the NIght, including at the Glyndebourne Festival in England, at the Paris Opera, the operas of Bordeaux, Marseille, Monte Carlo, at the Chorégies d’Orange, at the Santiago Opera in Chile, at the famous Teatro Colon in Buenos Aires and at the New York City Opera. She has performed Zerbinetta (Ariadne auf Naxos) at the Capitole in Toulouse, at the Opéra de Montréal and at the Teatro di San Carlo in Naples under the direction of Gustav Kuhn. Her signature role as Lakmé takes her to the stages of the Arizona Opera, the Opéra de Montréal, Michigan Opera, the Opéra d’Avignon, the Opéra de Toulon and the Badisches Staatstheather Karlsruhe.
In 2004, she premiered the important role of Pasiphaé in a world premiere of the opera Les Rois by Philippe Fénelon. She made her debut at La Scala in Milan in Europa Riconosciuta de Salieri, conducted by Riccardo Muti in 2005. She portrayed Konstanze in Mozart’s Abduction from the Seraglio with the Orchestra of the Age of Enlightenment from London on tour in Toulouse as well as at L’Opéra de Québec under the direction of Bernard Labadie. In concert, she had a personal triumph in Le Rossignol by Stravinsky (Festival International de Lanaudière) with the OSM under the direction of Charles Dutoit. Still with the same orchestra, she was very successful as the Angel in St. François d’Assise by Messiaen under the direction of Kent Nagano.

To celebrate Quebec City’s 400th anniversary, Ms. Kutan sang Carmina Burana on the Plains of Abraham with the OSQ and Yoav Talmi. Ms. Kutan is a laureate of the Metropolitan Opera Competition in New York, the International Singing Competition in Toulouse, the winner of the Joseph Rouleau Prize, the Licia Albanese-Puccini Foundation Prize in New York and the George London Foundation in New York. She has recorded several acclaimed recordings under the ATMA classical and Analekta labels. For several years now, she has been teaching singing at the Montreal Conservatory of Music and at McGill University.