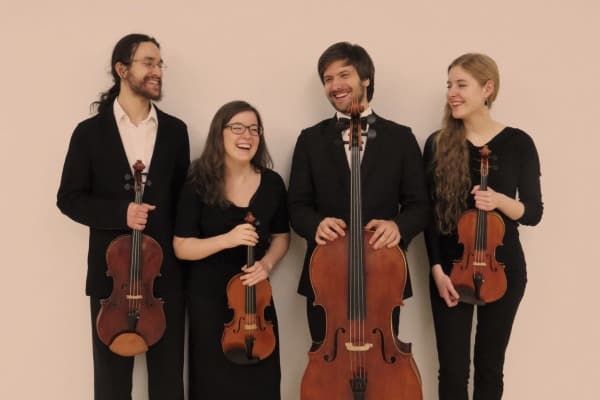 The brilliant ensemble, the Quatuor Andara offers you two of Beethoven’s most famous and rewarding quartets; the intriguing opus 95 and the immense opus 132.

This is a replay of a concert held on July 6, 2021 at L’Entrepôt Concert Hall

The young and already established, Quatuor Andara stands out as much for its dynamism as its quality of execution. It was in September 2014, performing Ravel’s Quartet in F major, that its members met for the first time at the Montreal Conservatory of Music, under the tutelage of Denis Brott. Since then, their passion and their complicity have brought them to stages all over Quebec. Numerous high-level international workshops have allowed them to work with musicians such as Günter Pichler, Mathieu Herzog and the Talich and Emerson String Quartet as well as the St. Lawrence String Quartet in Stanford (CA) in the summer of 2018 and the Shanghai Quartet at the Pablo Casals Festival in France in 2017 as well as working with Barry Shiffman and Mark Steinberg at the Banff Chamber Music Residency in 2016. This marks their fourth performance at the Lachine Music Festival. Marie-Claire plays on an Andrea Guarneri violin of Cremona 1660 as well as a Hill & Sons bow, and Dominique plays on a David Tecchler cello (1704) as well as a Pierre Simon bow (c. 1855), all graciously provided to their disposal by the Company Canimex Inc. of Drummondville (QC), Canada.